Here are some of the great services we offer

In due course we will add more links to the different types of music we publish
Meanwhile, you can go to our Publications page, where you can see the music we offer

Season of the Church Year

Carolyn Sparey studied violin and viola both at the Royal Academy of Music and the Royal College in Manchester, before launching her career on the British music scene. For two years she worked closely with Alfred Deller, the renowned counter-tenor, involving extensive tours of the USA, Canada and France, and regular recordings with Harmonia Mundi.

Carolyn also appeared regularly on the South Bank (London), on BBC Radio 3, and on the British concert scene both as soloist and chamber player, as well as performing regularly with the London Sinfonietta, the Academy of St Martin in the Fields and the English Chamber Orchestra. She also became a member of Yehudi Menuhin's chamber orchestra, involving many recordings and tours to Australia, New Zealand, America and Europe.

She became Principal Viola with the Scottish Chamber Orchestra during its early years, and performed as a soloist in Bach's Brandenberg Concerto No 6 for BBC television. It was at this time that she became involved with the Fitzwilliam String Quartet, performing Bruckner and Mozart quintets both for BBC Radio 3, at the Wigmore Hall, and on tour in Italy. She was also a member of Alan Hacker's Music Party, with which she gave the first performance of Harrison Birtwistle's Clarinet Quintet.

With the Chamber Group of Scotland, she performed the UK premiere of Penderecki's String Trio and Clarinet Quartet. 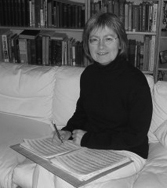 Since leaving the BBCSSO, Carolyn has begun to make her mark as a composer, her quartet heralded as 'truly an inspirational, moving, and challenging addition to the 21st century quartet repertoire' by Alan George of the Fitzwilliam Quartet, who gave the first, and subsequent performances.

Her virtuosic viola solo Les Planchistes de Paris, a celebration of skateboarding, has also been welcomed enthusiastically, and her piano solo Field, inspired by Anthony Gormley's sculpture of the same name, has become part of pianist Katherine Durran's repertoire.

She has been enjoying some exciting successes regarding her compositions, with performances of some of her work taking place in British Columbia, (March/April 2007), The Faroe Islands (September 2007), Orkney and the Isle of Skye (autumn 2007), and Mauritius (February 2006), where her work was exclusively featured in an hour-long TV programme as well as various venues around the island.

In September 2006, Rivka Golani came across some viola compositions and recordings by Carolyn Sparey, which prompted her to ask Carolyn if she would write her a viola concerto. In 2008 Carolyn completed the 3-movement, 30-minute concerto entitled From Behind the Veils, which is a tribute to the great 19th-century Persian poetess, Táhirih, who was imprisoned and then killed for her faith. The work is scored for chamber orchestra and solo viola."

Compositions at The Art of Music

Carolyn's most recent project has been the setting of poems by Robert Burns.

William Williamson, conductor of the Old Well Singers, had this to say of these new works:

"This is a wonderful addition to the heritage of Scottish song in this the 250th anniversary of Burns’ birth. To have new melodies is extremely refreshing and something of which Burns would have undoubtedly approved."

Five Burns songs have been composed so far, published by The Art of Music.

Also available is a setting of a poem by Henry Wadsworth Longfellow: Christmas Bells

Consequently, there are many pages using the old design, which will gradually be updated
However, you can still order your music from the old-style pages