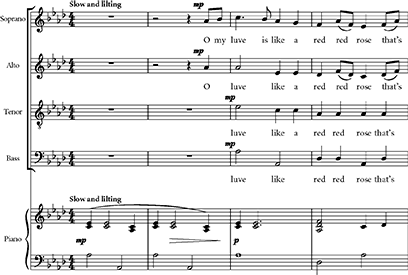 You can now buy sheet music for this piece (PDF download)

Notes on the piece

The first performance of Carolyn Sparey's new setting of the Burns poem, "A Red Red Rose" was on 20th July 2009 at a concert in St Michael's Church, Dumfries, beside the Robert Burns mauloleum.

The Burns actor John Cairney, who was also involved in the concert, commented very favourably on this new addition to the Burns repertoire, as did several members of the World Burns Federation.

It has been sung many times since then, by a number of choirs including Stirling University Choir.

We accept credit and debit cards for payment.
Your order will be placed in pounds sterling (GBP); however, your credit card company will bill you in your own currency.

To order a printable PDF, decide whether you want

Our sales are administered by e-junkie.com and you will be taken to their website to complete the transaction.

When your payment is complete, you will be able to download your PDF.

We treat your privacy seriously: we hate spam, just like you do.
We will not sell or give your details to anyone else, and you can unsubscribe at any time.

Do I need a PayPal account to buy music?

If you have a credit or debit card you don't need a PayPal account.

Orders for PDFs are normally processed immediately. Your licensed PDF should be available within a few minutes of your payment.

You will need a PDF reader to view the file. The most popular is Adobe Reader, although other suitable programmes are also available.

Orders for printed copies (where available) will normally be processed within 48 hours (excluding weekends and holidays).

Please note that in accordance with our environmental policy, we try to use suitable re-used packaging wherever possible.

As fair art thou my bonnie lass,
so deep in luve am I;
And I will luve thee still my dear,
till a' the seas gang dry.

Till a' the seas gang dry my dear
and the rocks melt wi' the sun;
and I will luve thee still my dear
while the sands o' life shall run;

"This is a wonderful addition to the heritage of Scottish song in this the 250th anniversary of Burns’ birth. To have new melodies is extremely refreshing and something of which Burns would have undoubtedly approved."